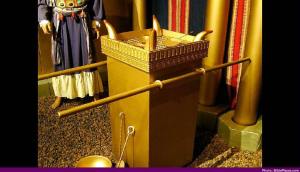 This post is another in the “Tabernacle” series. Select  “Tabernacle” under Categories to view the other posts in this series.

THE ALTER OF INCENSE

The third piece of furniture within the Holy Place, in the Tabernacle, was the Altar of Incense. It, too, was fashioned of acacia wood and covered with pure gold. Often it was called the Golden Altar. It was one and one-half cubits square at the top and base and two cubits high. Like the altar of burnt-offering, each corner was fashioned into a horn, covered with gold. On two corners, diagonal to each other, rings protruded, through which gold-plated poles were placed, by which the altar was carried.

This altar was located just in front of the veil, or curtain, which served as the entrance into the Holy of Holies. It was placed in an exact line with the brazen altar, the laver, and the Ark of the Covenant, which was on the other side of the veil from the Golden Altar. Like all the other pieces of furniture in the Holy Place, the Altar of Incense was first anointed with oil, signifying that it was separated and sanctified for its appointed service. (Exodus 30:26-29)

The Divinely given instructions concerning this part of the procedure of worship in the Tabernacle were very explicit. No other fire than that taken from the altar of sacrifice could be used for burning the sacred incense upon the golden altar. Instant death was the penalty for carelessness or disobedience in this matter. Let us not miss the importance of this requirement. The fire which had consumed the sacrifice for sin, alone, might be used to burn the incense used in the worship of GOD. No man may hold converse with GOD except through the redemptive work of JESUS CHRIST, our Saviour. JESUS was very clear about this, “No man cometh unto the Father, but by me.” (John 14:6) This is not open to debate.

CHRIST, THE WAY TO GOD

No man can come unto the Father except through the high-priestly ministry of JESUS CHRIST. He is our Advocate with the Father. He is our Intercessor before the throne of GOD. It is the will of the Father that every person shall believe on JESUS CHRIST, accept Him as Saviour, and then come unto GOD through His high-priestly ministry. This clearly reveals why the sacred fire must come from the altar of burnt sacrifice, or, in other words, by the way of the Cross, where our blessed Saviour shed His blood to make possible the taking away of our sins.

No one has any valid claim on JESUS CHRIST until he is saved, or until he has accepted the sacrifice GOD has made for the remission of sins. Up to that moment, he can pray only for salvation. When he has been saved and is walking in the LIGHT, in fellowship with his Saviour, and has been cleansed from sin, and is partaking of the Bread from Heaven, and is living by faith in the Son of GOD, then, and only then, can he come to the altar of intercession and present the name of JESUS, through whom, alone, we have access unto the Father, who knoweth what things we have need of before we ask Him. (Matthew 6:8) It was not until after His death and resurrection and ascension into Heaven, that the ministry of our Lord, as our Intercessor, became effective.

The effects of sin cannot be dealt with, until CHRIST has dealt with the CAUSE of disease, and death, which is SIN. JESUS did that on the CROSS. CHRIST cannot heal those who reject Him, as their Saviour from sin and death. If they appear to be healed by supernatural power, that power is NOT that of Him, who became obedient unto death, even the death of the cross, that they might be delivered from sin, and whose power was given unto Him in Heaven and on earth, because He so freely gave Himself to die in our stead, that we might be delivered from sin and death. “And without shedding of blood is no remission (of sin),” and no mercy, no healing, NO ANYTHING. Do you now see how essential is the symbolic meaning of the live coal taken from the altar of sacrifice, when the priest brought it to the altar to burn the incense – which act of worship symbolized prayer and intercessions lifted to the Holy GOD, and Father, on the basis of the sacrificial death of His Only Begotten Son on the Cross for our redemption from sin.

The priest went to the Golden Altar early every morning to observe this sacred rite, and we must not fail to note that once each year, on the Day of Atonement, when the High Priest must needs go into the Holy of Holies, bearing in his hands a golden vessel, filled with the blood of a spotless lamb; before the veil between the Holy Place and the Holy of Holies could be opened, the whole house of GOD must be filled, FILLED, with the smoke and sweet odor from the burning of great quantities of precious incense, which are the prayers of the saints.

Thus we are taught by these sacred and significant symbols that, whenever a believer or believers who, indeed, are priests unto GOD, would enter into His presence and commune with Him and receive of His power, to be manifested unto men about them, there must be offered up to GOD a great volume of prayer and intercession which completely acknowledges and honors the blood-sacrifice of JESUS CHRIST, our Lord, until GOD Himself opens the veil into the Holy of Holies and bids His worshippers to enter into His presence. Then, only, may they expect to behold His Glory and to receive of His power and to witness the manifestations of Divine power to revive GOD’s people, and the efficacy and power of the Gospel to save precious souls, and to transform communities and nations and, break the shackles of sin and set them free, and, sweep them into the Kingdom of GOD, and thus save this sin-cursed world from destruction.

So many times we rush into our tabernacles of worship, this emergency or that, under this pressing need or that, without realizing that we cannot enter into GOD’s Holy of Holies, unless we bring a burning coal from off the altar of sacrifice, or indeed, come by the way of the Cross of CHRIST, remembering that it is through His sacrifice and sacrificial love, alone, that we can come unto the Father; and that we have no privileges or power before the throne of GOD, except as we come through our Great HIGH PRIEST, Intercessor and Advocate with the Father, JESUS CHRIST, the Righteous.