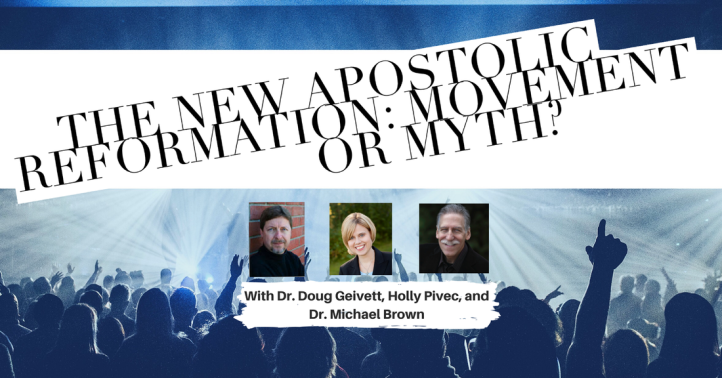 If you’ve been following my blog for any amount of time you will have observed that I have authored a good number of posts on the New Apostolic Reformation (NAR) movement that has and continues to infiltrate and deceive the Christian Church at large.

For a quick overview with applicable doctrine and informational links click here.

The growth of this movement continues unabated and is literally astounding and at the same time quite sickening. And one of the primary reasons for it’s growth is that far too many sheep have an appalling lack of understanding with regards to knowing God’s Word.

A recent discussion between Dr. Michael Brown, Dr. Doug Geivett, and Holly Pivec on Alisa Childers website about the legitimacy of the NAR movement and subsequent follow-up responses by both Holly Pivec and Dr. Michael Brown, reinforced the absolute necessity to be able to discern sound doctrine and authentic manifestations of the working of God’s Holy Spirit. If you’d like to see what ensued from that exchange, click here.

1.The US Coalition of Apostolic Leaders (USCAL) considers their organization a part of The New Apostolic Reformation (NAR). (Source)

I found it interesting that both Dr. Michael Brown and Joseph Mattera mentioned that “The present apostolic paradigm will bring a course correction to the New Apostolic Reformation (NAR) and view the apostolic as a ministry function—not an office—as an adjective—not a title.” Dr. Brown inferred this in the recent podcast with Holly Pivac and Dr. Doug Gelvett and Joseph Mattera specifically mentions the “course correction” aspect in his recent posts:
http://josephmattera.org/necessity-restoring-apostolic-ministry-today-part-1/ and
http://josephmattera.org/the-nar-and-the-restoration-of-apostolic-ministry-today-part-2/

Anyone who thinks that this is just a whimsical group of people who really aren’t all that well organized and don’t have a specific agenda that is without doubt moving forward, has their head in the sand. For a deeper look at the organization within the NAR movement, check for “Some NAR Related Websites” here.

I had an interesting discussion yesterday with one of my daughters, who I love dearly and is a relatively new Christian, about Danish evangelist Torben Sondergaard. One of her questions to me was “I love what God is doing through these people….why aren’t we doing that?”

Apart from the assumptions that it is God that is doing these things and that it is something that we, as Christians, should be desirous of emulating, I inquired on what approach she used when determining whether the teachings and manifestations she was looking at, were in line with God’s Word.

The reason I asked her this question was due to the fact that we have previously discussed the necessity of using God’s Word to make judgements on what is sound doctrine and what is not. My daughter responded that she looked at the Bible verses that were quoted by Torben Sondergaard and checked them out to see if they were in line with what he said.

Not a good idea. If you are endeavouring to discern as to whether something is doctrinally correct you must FIRST be aware of what all of God’s Word says about a particular doctrine. That means from the beginning of Genesis to the end of Revelation. If you’re only going to check the verses that are provided and neglect other verses that are also associated with the subject matter, it’s like suspecting that you have a leak in a inner tube. To correctly check the inner tube you need to check all of it, everywhere. And if there are multiple leaks and you only fix one, you still end up with an inner tube that leaks and if you’re using the inner tube to keep you afloat on water, it’s not going to sustain you.

Short story is that you don’t just check to see if the teachings or doctrine that you are being asked to believe in, is in agreement with the verses that are quoted. You check to see if the teachings and verses that are being quoted are in agreement with all that God says on that subject. And here is the kicker, if you don’t know what all of God’s Word says on a particular subject, you really have nothing to compare it with and consequently make a Biblical discerning judgement. Therein lies the problem.

There are some Bible verses that I’d like you to consider.

Matthew 7:21-24 NIV  “Not everyone who says to me, ‘Lord, Lord,’ will enter the kingdom of heaven, but only the one who does the will of my Father who is in heaven. Many will say to me on that day, ‘Lord, Lord, did we not prophesy in your name and in your name drive out demons and in your name perform many miracles?’ Then I will tell them plainly, ‘I never knew you. Away from me, you evildoers!’

The NAR movement is closely associated with “signs and wonders”. Do signs, wonders and miracles still happen, yes they do. But are all signs and wonders legitimate, no they’re not. We are to test everything and discern as to whether it is from God or it is not from God. (1 John 4:1)

And remember that Jesus told us that the words that He gives us are from our Heavenly Father.(John 12:49)

Jesus warned us in Matthew 24:24 that there would be a great deception so clever and intense that, if it were possible, the very elect would be deceived.  And the Apostle Paul tells us in 2 Thessalonians 2:9-10 NIV “The coming of the lawless one will be in accordance with how Satan works. He will use all sorts of displays of power through signs and wonders that serve the lie, and all the ways that wickedness deceives those who are perishing. They perish because they refused to love the truth and so be saved.”

And finally, Paul tells us in Galatians 1:8 NIV “But even if we or an angel from heaven should preach a gospel other than the one we preached to you, let them be under God’s curse!”

It grieves me that so many are being so easily deceived.

“Study to shew thyself approved unto God, a workman that needeth not to be ashamed, rightly dividing the word of truth.”