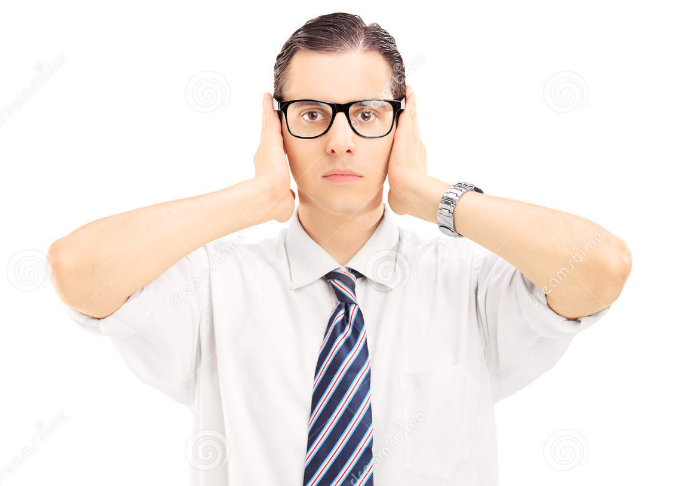 I’m currently going through the difficulties that David encountered in 1st Samuel again only this time I’m using the ultra slow reading method where each word and phrase is evaluated on it’s importance and I am amazed and appalled at the number of things that I missed before in my numerous readings. There is just so much information packed into 1st Samuel that it’s not funny. Were you aware that David was chosen by God to be the next king and anointed with oil and given the Spirit of God by Samuel BEFORE David slew Goliath. (1 Samuel 16:1 1 Samuel 16:12-13 1 Samuel 17:45-49). Not sure how I missed that before but I did.

Here’s a picture of a couple of pages on my studies in 1st Samuel just to give you an idea. Three colours (yellow, orange and red) plus 1, 2 or 3 stars and underlining. Also arrows for connectivity and boxes for God’s character. Works for me! I’m doing mostly the OT but also the NT at the same time. I’m using the Amplified Study Bible. 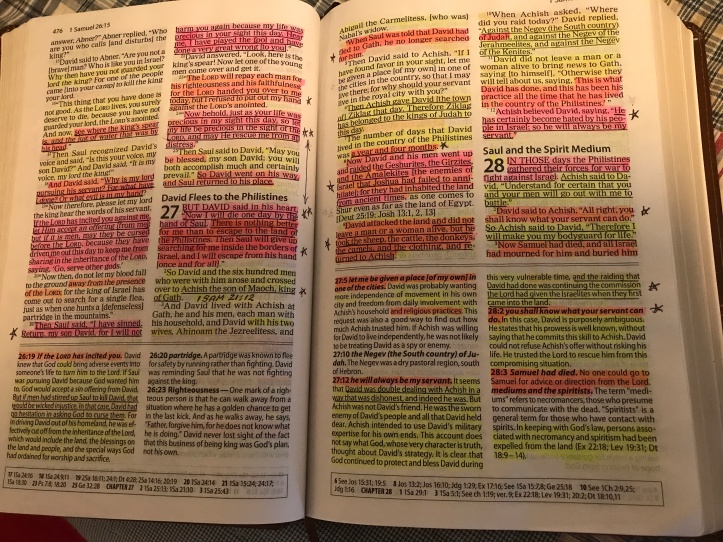 What also intrigued me is the feeling of peace and comfort that I  have experienced going through 1st Samuel again this time. And considering that God chose to dispatch (as in kill) 80,070 (30,000 and 50,070) Israelites at the start of 1st Samuel for disobedience, that’s not an easy state of mind to get into. It’s almost like I’m there and I can sense what must have gone through David’s mind. But I digress, that’s not the focus of this particular post.

I have to tell you that I am getting so very tired of the constant bickering and the never ending barrage of conflicting perspectives, both from within and outside of the church, about the various perspectives of Christianity. If I see one more post authored by an advocate of YEC, on how Young Earth Creationism (YEC) is superior to Old Earth Creationism (OEC) I am going to scream.  And that unfortunately, is just the tip of the iceberg. You really don’t want to go there.

I could list some of the various topics that are being bickered about but that would be depressing. And what really boggles my mind is that in the midst of this continual aggravation I am finding peace and comfort in what David went through in 1st Samuel.

Why? Because David was human like you and I. In spite of his dealings with God, in spite of confirmation of guidance and protection multiple times through and by God, David still had human fears. Take a look at 1st Samuel 27:1 One would have thought, after all that David has experienced and witnessed, that he wouldn’t have any fear of his life being taken from him, because God had his back and greater things were to come, but he did. Every time I “see” things like this, it encourages me because I know in my heart that God understands me better than I understand me. Really. I marvel at His grace and patience.

And this verse continually comes into my mind, Romans 15:4 NIV “For everything that was written in the past was written to teach us, so that through the endurance taught in the Scriptures and the encouragement they provide we might have hope.”

I have no doubt that David, Saul, Samuel and all of the other peoples and places written about in 1st Samuel are real. I don’t argue with myself about any of it. To me, this is like witnessing a real time event. I even noticed that they have recently discovered the town of Ziklag, which David was given and lived in when he stayed with the Philistines. Of course they found the ancient town, this is real history. Take a serious hard look at all the denials that have been spouted out by those who wish to be discard the Bible, only to be confirmed through archaeological discoveries.

There are just so many little inconspicuous (yet vitally important and revealing) things that are woven into 1st Samuel and all of the other books of the Bible that it is to my mind simply ludicrous to continue on with the constant debates about what source or how accurate or a host of other attempts to discard what we have been given. Fill your boots, I’ve had enough. I’m reading God’s Word and thoroughly enjoying it.

Yes, you’re right, I’m not a scholar. Probably a little on the simplistic side too. I do believe I have solid reasons for the faith that I have and I understand that some may not accept those reasons and that’s fine. Been there and got the T-shirt. Somewhere along the line I got tired of kicking the tires and I have taken God at His Word. And that my friend, made all the difference in the world.

John 14:6 NIV  “Jesus answered, “I am the way and the truth and the life. No one comes to the Father except through me.”

Ultimately you either believe this or you don’t. Everything else is window dressing.