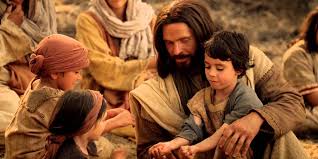 I know that Jesus healed people and that He could feed thousands with next to nothing in available food, that He could walk on water and command the seas and winds to be still. And I know that these things are what one might expect to see, as a visual validation or confirmation of who Jesus said He was and is. Jesus was able to do what other normal human beings could not do. And there’s a reason for that, because Jesus was not a normal human being. But above and beyond that, there are His recorded actions and words that have been written down for us to read and hear. I don’t know about you, but sometimes, actually a lot of times, it is those very words that He spoke and the realities that He conveyed to us, that penetrate deep within me and fill me with the blessed hope that He is.

And the words that Jesus spoke have been passed onto us through the Gospels of Matthew, Mark, Luke and John. And when your really stop to think about it, those four Gospels aren’t really all that big, in fact all four of them put together could easily be considered a short novel or book. So it’s not the magnitude or volume of words that Jesus left us, it’s what He conveyed to us in those seemingly four relatively short narratives, that He left for others to write. Doesn’t that strike you as odd, that Jesus Himself did not write anything for us, but left it for others to do? Considering the utter importance of Jesus coming in the flesh, as the promised Messiah, telling us that He is the way, the truth and the life and how He has perfectly fulfilled God our Father’s will, who among us would leave that for others to communicate? But Jesus did. What are the odds on that working out according to plan? What did Jesus know that we didn’t know? That fact in itself should tell you that Jesus is not ordinary.

And of course, we’re not talking about another intellectual perspective or a philosophy that one can entertain to accept or reject without any substantial consequence. This Gospel, this good news, the new covenant that Jesus brings us, sealed with His shed blood, is all about Jesus putting His life on the line for us. The just dying for the unjust with the proof of His divine purpose demonstrated through His resurrection, as our promised hope. Because I live, you shall also live (John 14:19). There’s one ministry, one consistent message and one predetermined result that Jesus spells out for His disciples, well before it happens. Jesus wasn’t surprised at how things would turn out. Jesus knew exactly what was going to happen next, in fact, it was the reason why He was sent by the Father (John 3:16). Margin for error – nil.

Remember when the Philip asked Jesus to show them the Father? Remember what Jesus said? He who has seen Me has seen the Father (John 14:9). Who would dare to say something like that?

Remember Jesus telling us that it is an absolute necessity for us to be born again (John 3:3)? Confirmation of the spiritual reality? Yes it is. God is a spirit and those who worship Him must worship Him in spirit and in truth (John 4:24). Crazy concept? Not according to Jesus. And we can see the testimony or witness to the reality of rebirth in nature all around us.

Behold the lamb of God who takes away the sin of the world (John 1:29).

I could easily list thirty or more “remembers” from the teachings of Jesus, because there is so much more that Jesus explained but because posts need to be relatively short, I’m only going to focus on one more.

Mary, Martha, Lazarus and Jesus plus a whole bunch of onlookers.

We’re talking about John 11:1-43. Take the time to read this again if you have the time.

Quick Summary: Lazarus has died, Jesus loves Mary, Martha and Lazarus. Jesus deliberately delays going to the bereaved family until four days have gone by so as to exemplify the glory of God (what God can do). Lazarus’ body has definitely started to decay because there is a stench from his tomb. Jesus tells Martha that Lazarus will rise again. Martha thinks Jesus is speaking about the resurrection that will occur at the last day (one of the numerous things that Jesus tells us about). Then in verse 25: “Jesus said to her, “I am the resurrection and the life. The one who believes in me will live, even though they die; and whoever lives by believing in me will never die. Do you believe this?”

Jesus said to her, “I am the resurrection and the life”.

So many just don’t get it. This Jesus is no ordinary man. This is Jesus, the Son of the living God telling Martha, and us, that HE IS the resurrection and the life.

And we recall what happens next, Jesus tells Lazarus to come out of the tomb and Lazarus is alive again.

Four days. A stench from the tomb. Lazarus lives again.

And then of course, we have Jesus, who foretold his own death and resurrection and true to His word, Jesus rose from the dead after three days and was seen on multiple occasions over a period of 40 days by the Apostles and disciples. The Apostle Paul, among others, gives us this testimony:

This reality and testimony of Jesus rising from the dead is not just wishful thinking. The Apostle Paul makes the reality of Jesus rising from the dead abundantly clear when he categorically states in 1 Corinthians 15:13-19 NIV “If there is no resurrection of the dead, then not even Christ has been raised. And if Christ has not been raised, our preaching is useless and so is your faith. More than that, we are then found to be false witnesses about God, for we have testified about God that he raised Christ from the dead. But he did not raise him if in fact the dead are not raised. For if the dead are not raised, then Christ has not been raised either.  And if Christ has not been raised, your faith is futile; you are still in your sins. Then those also who have fallen asleep in Christ are lost. If only for this life we have hope in Christ, we are of all people most to be pitied.”

There are undoubtedly some who question or doubt as to whether Jesus rose from the dead but the Apostles and early disciples would not be among them. These are the same Apostles who all gave their lives (excluding John) for the Gospel of Jesus Christ and these are the same Christian disciples who turned the then Roman world upside down.

As Jesus said to the Apostle Thomas, “Then Jesus told him, “Because you have seen me, you have believed; blessed are those who have not seen and yet have believed” (John 20:29 NIV).