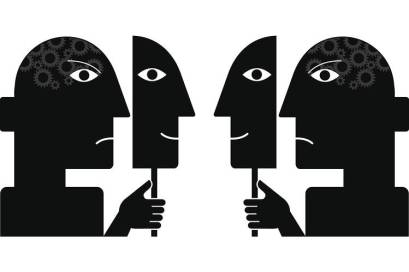 Hypocrisy is the contrivance of a false appearance of virtue or goodness, while concealing real character traits or inclinations, especially with respect to religious and moral beliefs; hence, in a general sense, hypocrisy may involve dissimulation, pretense, or a sham. Hypocrisy is the practice of engaging in the same behavior or activity for which one criticizes another.

Matthew 7:5 NASB  “You hypocrite, first take the log out of your own eye, and then you will see clearly to take the speck out of your brother’s eye.”

I don’t know about you but when we read these words that Jesus spoke, it would behoove us to seriously take them to heart, and I am talking about
S E R I O U S L Y. This isn’t a hide the ball in a cup game that we’re playing, Jesus is drawing our attention to one of the most important aspects of rendering judgement towards others, and ourselves, not to mention, our relationship with God in this specific matter, needs to be based upon a Scriptural understanding of our own position or standing with God, from God’s perspective, as articulated by Jesus, to us. To understand the context of Matthew 7:5, we really need to start back at Matthew 5:1 and read through to Matthew 7:29. (Matthew 5,6,7:1-7:29)

If one infrequently looks at the various multimedia platforms such as FaceBook or Twitter, it doesn’t take very long before we encounter a comment by someone who implies that people who profess to be Christians are hypocrites. And depending upon the example that they are drawing attention to, sometimes their observations are correct. Please note that I used the word “sometimes”.

I could easily give you examples that are self evident when we enter into Christians advocating Christian morality issues, in concert with the political arena, but I’m going to pass on that because I really don’t feel like getting into an argument with anyone right now. These are my personal observations, if you disagree with me, I can live with that. We disagree.

And, just to make it interesting, we, as Christians, are told to not judge outside of the Church when it comes to the non-Christian individual. Judge sin, yes, we need to know and discern what is acceptable and not acceptable within the will of God, judge non-Christian sinners, no. (1 Corinthians 5:12-13) You can correct me if you think I am wrong but I see many examples of where some Christians confuse the sinner with the sin. Once again, please note that I used the word “some”. How is it that this fundamental Christian principle gets overlooked?

One of the reasons why I blog is that it provides me with the means whereby to sort out obstacles that I encounter in my walk of faith from time to time, which, I think, most of us do experience. Sometimes I blow it and within reason, I explain on my blog what it was or is, where I errored. More times than not, through prayer, where I confess my sin and ask God for forgiveness, the study of God’s Word and reflection, God sees fit to bring about reconciliation with myself and the injured party. Not always but most times. There is a distinct difference between stating what we’d like to be and where we currently are. That’s not hypocritical, it’s reality and part of how we grow.

When Jesus had harsh things to say about the Pharisees being hypocritical it was because they showcased one thing but in reality practised another, WHILE AT THE SAME TIME they DENIED there being any difference between the two.

Confessing our sins and asking for forgiveness and moving forward by correcting our ways, as much as we are able to at that given point in time, is the norm. That aspect of walking with God was absent with many of the Pharisees. Don’t confuse being hypocritical like the Pharisees were with admitting that we haven’t arrived yet, in our quest to be like Jesus.

All of us, including the Apostle Paul, as he states in Philippians 3:12 “Not that I have already obtained it or have already become perfect, but I press on so that I may lay hold of that for which also I was laid hold of by Christ Jesus.” are in that same boat. When Paul came to the end of his course he stated that he had fought the “good” fight (2 Timothy 4:7). It is a fight and the “good” part of the fight that Paul talks about is that we don’t stop, we keep learning and moving forward.