A Brief Look at the Sadducees — EttingerWriting.com – Revisited

This blog explores a sect of Judaism which clashed with Jesus during His earthly ministry.

This is the second repost of David’s continuing series on the historical, religious and political settings of Israel that set the stage, so to speak, during the ministry of Jesus. Understanding the historical, religious and political backdrop is really important as it provides a deeper layer of understanding with regard to the fierce opposition that Jesus faced and most importantly why. I will be reposting all of David’s posts on this series he is graciously providing. If you aren’t already following David’s blog, https://ettingerwriting.wordpress.com/  I would strongly encourage you to do so. I shall reproduce David’s post here in it’s entirety for your viewing convenience.

The Sadducees, a sect of Judaism, took their name from Zadok, the first High Priest of ancient Israel to serve in the First (Solomon’s) Temple. Hence, their Hebrew name was Tzedoqim.

The Sadducees consisted of the aristocratic upper crust of Jewish society. They were members of influential families, had political standing, and believed in working along with the ruling power of the day, either Greece or Rome. In this way, they were able to stay in power.

The Sadducees controlled the ritualistic sacrificial system of the Second (Herod’s) Temple, and collected the tithes for the upkeep of the Temple. They also wielded very real secular power. Under the Hasmonean dynasty (160-63 B.C.), the Sadducees gained control of the Sanhedrin (the supreme council and tribunal of the Jews) and had jurisdiction over religious and other domestic matters.

When power transferred to the Roman Empire in 63 B.C., the Sadducees were able to hold on to their control of the sacrificial system of the Temple as well as the Sanhedrin.

Cultural Beliefs
As mentioned in the first blog of this series, the Sadducees are descended (culturally and ideologically) from the Jewish aristocracy which favored Hellenism as the major influence in Jerusalem a century earlier. However, though they carried on the more “liberal” thinking of those early Jewish Hellenists, they were more constrained, never allowing their beliefs to intrude upon the Mosaic Law.

Because the vast majority of the Sadducees came from wealthy elite of Jerusalem, they never found much sympathy among the masses. The “common” Israelite of the day had little in common with these aristocrats, and had no compulsion whatsoever to align with them.

Unlike the Pharisees, the Sadducees did not accept all of the Hebrew Scriptures, but only the first five books known as the Pentateuch: Genesis, Exodus, Leviticus, Numbers, and Deuteronomy. Ironically, in this way they were similar to the lowly-regarded Samaritans (read my blog, “A Brief Look at the Samaritans”).

Furthermore, they did not believe in the concept of an afterlife, which at that time was gaining great popularity in Judaism, particularly among the Pharisees (and is clearly taught in the Book of Daniel). They also rejected the belief of angels, demons, resurrection from the dead, and apocalyptic predictions of the last days. They likewise did not accept the oral law as developed by the Pharisees.

What they did advocate was the animal sacrifices at the Temple and the role of the priesthood.

The Sadducees and Jesus
Perhaps the most famous confrontation between Jesus and the Sadducees concerned their questioning Him on an issue regarding marriage and, especially, the resurrection of the dead. This, of course, was disingenuous on the part of the Sadducees because they did not believe in the resurrection; their goal was to discredit Jesus, not to discover truth.

In Matthew Chapter 22, the Sadducees ask Jesus the following:

Moses told us that if a man dies without having children, his brother must marry the widow and raise up offspring for him. Now there were seven brothers among us. The first one married and died, and since he had no children, he left his wife to his brother. The same thing happened to the second and third brother, right on down to the seventh. Finally, the woman died. Now then, at the resurrection, whose wife will she be of the seven, since all of them were married to her? (vv. 23-28). 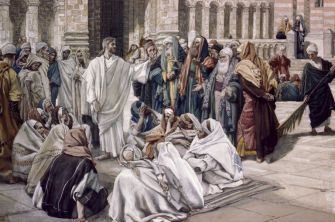 The question is preposterous and Jesus exposes the duplicity of the Sadducees while at the same time shaming them most deservingly. The Lord replied:

One would think that after being taken so soundly to the theological woodshed the Sadducees would reflect, reconsider, and repent. However, as Jesus elucidated, the Sadducees did “not know the Scriptures” nor did they know “the power of God.” They were ignorant on both counts, and had no desire to overcome their spiritual shortcomings.

The Sadducee “Legacy”
It is no wonder that absolutely NONE of the writings of the Sadducees have been preserved. All we know about them is what we read in the Bible and extra-biblical sources. They were theologically limited, have left nothing in writing for the generations to come, and denied both the messiahship and Deity of Jesus Christ.

This is the lamentable legacy of a sect of men who lived at the same time of Christ, interacted with Him, witnessed the miracles He performed, but in the end denied Him.

Up next: A Brief Look at the Pharisees

You can also view David’s original post via the following link A Brief Look at the Sadducees — EttingerWriting.com